I live alone so when the electricity goes out 2 to 3 times a year I have to handle it.  My stroke took away my ability to know where vertical is unless I can see my surroundings.  So I put flashlights in every room.  My plan worked until last night when the house went completely black while I was watching TV at 10 p.m.  I reached down for the flashlight on the floor next to my couch.  I started to freak out when I could not find it.  The electricity has gone off for hours in the past and sitting on my short couch until sunrise would be awful.  I finally found the flashlight, but after the lights came back on I put the flashlight in a different location.  I moved it to the tray on my couch that holds my remote control devices.  I also moved a second flashlight to a counter directly behind the place I sit at my kitchen table. 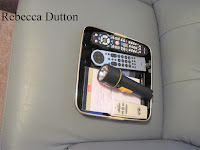 A previous outage taught me to put a battery operated lanturn on a cart next to my bed.  I turn the lantern on by rolling on my side and pulling the cart close too me so I can feel the on switch.